ALICUDI: THE ISLAND OF STEPS

Primitive in its nature, steps instead of roads and mules as the only means of transportation

The oldest known name for the island was Ericusa, so called for the abundance of heather that grew there. It is the westernmost and least populated island of the entire Aeolian archipelago. The island is cone shaped and an oasis of tranquillity in the middle of a sparkling blue sea, a paradise, a place with immense energy, an island that fascinates and yet remains outside the mass tourism circuits. Alicudi is the ideal place to enjoy a holiday in peace and quiet and to be in touch with nature. No cars or motorcycles, in fact no roads, only steps with mules for transportation. The island has a peculiar network of pathways that will surprise you from the first moment: mule-tracks paved with steps undulate like snakes embracing the island, linking the port to the mountains or across the island longitudinally. These steps were constructed by the islanders working the lava stone and shaping it to form thousands of steps that allow access both to the individual  homes scattered around the island and the small groups of dwellings clustered together forming small boroughs. The island is extremely beautiful, nature reigns supreme and the vegetation merges with the geometry of the dry stone walls that divide the terraces which, until a few years ago, were fully cultivated. On Alicudi you will discover the charm of a place that has remained largely unaltered over the years. In the evening the atmosphere becomes almost magical as there is no street lighting. After dark when seen from the sea the lights of the houses can make the island resemble a giant nativity scene under a sky carpeted with thousands of brilliant stars offering a fabulous and unforgettable show. On Alicudi you can live a fantastic adventure and experience unique emotions. The sea can be seen from anywhere on the island and its intense perfume will be with you anywhere you go. Here you can relax both mind and body, explore the trails and admire beautiful and uncontaminated places, ideal for hiking. The crystal clear waters of the sea will invite and entice you for swimming, fishing and diving or you can simply explore the seabed’s rich habitat with its abundance of plant and animal life. Given its small size – only 5.2 km² – you can also discover the island from the sea, circumnavigating with a boat in order to better admire the breath-taking spectacle of the huge rocks protruding majestically into the sea or the old channels where the lava flowed from the volcanoes mouth down to the shore, you will also see the remains of solidified lava that form the dry rivers on the walls of the ancient volcano. Give yourself a holiday at Alicudi, discover its cuisine with traditional dishes that give a flavour of an ancient world, wild vegetables, mushrooms collected in the mountain, fresh fish and many other natural local foods. 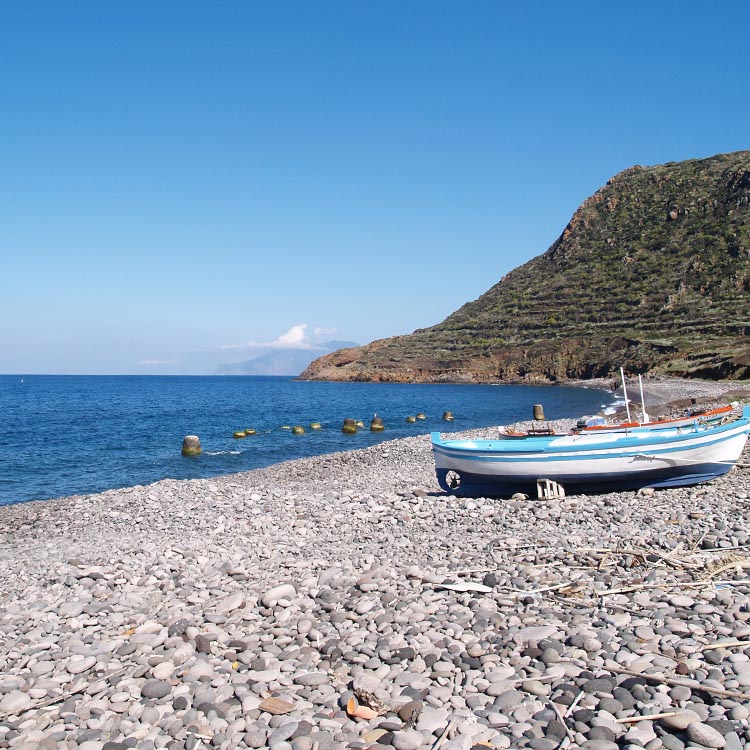